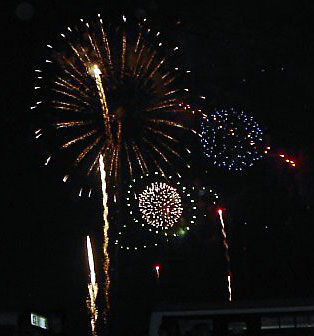 Usually held on the first Saturday of October, the Tsuchiura Fireworks is the last major competitive event of the year for pyrotechnic teams from around the nation. Many observers say that it is one of the very best fireworks displays in the entire nation, as fireworks artists put everything they've got into the grand display. Many of thousands of bursts are prototypes of new designs for next year's season, and so fireworks makers want to make a good impression on potential buyers.

The higher bursts can easily be seen from any elevated spot in Tsukuba with a view of the eastern sky, but it is really worth making the effort to join the crowds near "ground zero" and take it all in. The show begins at about 6 pm and lasts for about 2 hours. Parking is always a problem, and since people begin showing up 2 or 3 hours early to get a good spot, you will need to allow plenty of time. In fact, many people plan an afternoon picnic while staking out their claims to a space. As much of the area will be newly harvested rice fields, be sure to take a plastic tarp to cover the ground along with any other convenience you want along, such as pillows, blankets that you're willing and able to carry along. The best views from the Tsukuba side are along Highway 6 (6-go bypass), which is an elevated highway across the fields. The Ohta Store (I think the name is now different, but it's at the point where the elevated roadway meets the hillside on the south and isn't elevated anymore) parking lot is an excellent place to view from, but you need to get there early and not be in a hurry to get back. Cars crowd along every little side street, often making passage difficult. For easy access and relatively quick departure, the best parking is along the Tsuchiura Gakuen Sen. The outer two lanes of this 4-lane road are made available for parking, and so if you need to make a quick exit, park along the side of the road headed towards the direction you want to go.

It is only a few minutes walk from there to the fields between the bypass and the river, where most people watch it from, and then it is comparatively easy to get out and on your way back. Don't expect to be able to do that if you wait until an hour or so before dark to go. If you must go later, the best way is just to go by bicycle. If you have a car that is big enough to put your bicycle in, then you can drive part way, find a parking spot on some back road and bike from there. In case of rain or high winds, the event will be postponed until the following night. The weather is usually quite nice in early October, but by evening, it is likely to be a bit cool. So be prepared with a jacket and a flashlight.